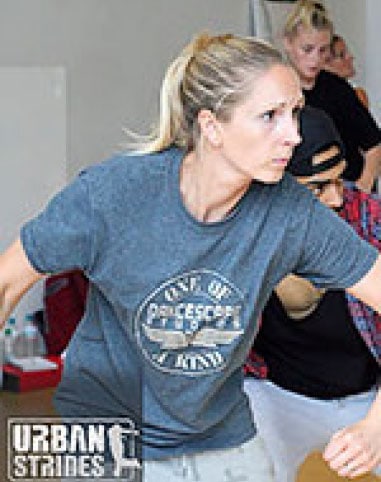 Her professional career spans all performing arts, dance, acting, and singing, but Michelle’s primary passion is dance. She studied most forms of dance from early childhood, but Street Dancing captivated her, and she knew that this was what she wanted to do for the rest of her life. By its very nature, Street Dance allowed Michelle more freedom than other dance disciplines.

Training in Ballet, Modern and Tap from age 3yrs, At age 7yrs she then went on to complete IDTA exams and performing in a wide variety of competitions, festivals, and shows. Beginning her professional career in 1997, Michelle completed a 3yr Dance and Musical Theatre Diploma, and further added to her qualifications with an A-Level in Dance as well as professional accreditation as a YMCA/RSA fitness instructor.

From her extensive solid dance base, having been trained in technique, rules, and disciplines, Michelle embraced the creative Street Dance genre, loving the ‘attitude’ and autonomy, the excitement of improvisation, and the unparalleled freedom to escape and expressing herself through movement.

Developing her choreographic skills and taking the opportunities that arose within the performing industry was a natural progression. Michelle diversified to work nationally and internationally as a commercial dancer, in advertising campaigns, fashion, videos, corporate events, and live shows. She was often asked to represent Pineapple Dance Studios and did various trade shows, like Vitality, and was a valuable member of the Sky Sports Dance Squad.

Appearing in many TV shows as a backing dancer for BBC Sports Relief, Johnny Vegas Show, BBC Generation Game, Gladiator Vogues Dance Fitness to name but a few, Michelle alongside her dancing also filmed regularly for Eastenders, the Bill, Holby City, and appeared in films such as Kevin and Perry Go Large and Bridget Jones , BBC Supergrass were all amongst her extensive work portfolio. Although Michelle was offered more permanent roles as a student nurse in holby city and to work in the cafe on a regular basis in Eastenders, Michelle turned this down for her love of Dance and continuing to perform.